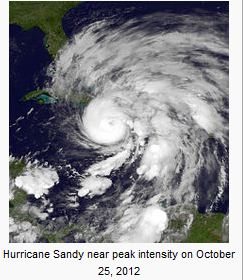 Fully two weeks after Hurricane Sandy, the recovery efforts are still frustrated by the lack of fuel and communication. There must be a better way to truly prepare for these events and to avoid the familiar storm after effects.

In my personal experience, gasoline lines (fuel shortages) and communications problems have been predictable after effects of major storms for fifty years.  My first storm recovery effort was Hurricane Agnes in 1972.  At the time I was a student at Penn State University (recently released from four years of active duty) and a Captain in the Pennsylvania National Guard based out of Lewistown, PA.  During the storm we performed rescue and evacuation work in and around Lewistown and then food distribution and fuel delivery to local municipalities on the I – 80 corridor from Altoona to Scranton.  Many roads were destroyed in Central Pennsylvania and many bridges were missing resulting in isolation for many communities.

A significant problem in coordinating logistics was the lack of communications between the various state and local governments.  We had supplies at point A but the folks at Point B could not request what they needed.  We attempted to solve this problem using mini-convoys of National Guard trucks and fuel tankers. We also escorted commercial semi-trailers of foodstuffs to communities along our supply routes. In order to report situations along the route we utilized emergency phones on the Interstate system or stopped State Police cruisers. The State Police would relay messages to our headquarters and provide us with new directions and orders to serve additional communities and locations. Following the storm the State of Pennsylvania received a large grant to improve emergency communications across the state and rebuild damaged facilities.

Similar state and local actions took place after Hurricane Katrina in Louisiana and now we are watching comparable recovery efforts in New York and New Jersey. But why wasn’t the expected emergency response to Hurricane Sandy better planned and timelier?  After all, the weather reports gave us plenty of time to prepare. The day after the storm all the right signals (TV interviews and speeches) were sent and promises were made to restore the situation to normal. However, the reality is that weeks later many communities still lack commercial power, communications and fuel  — predictably making a bad situation worse.

We can do better and should have already implemented reasonable emergency planning solutions. All large gas stations need to be equipped with emergency generators or have their electrical systems enhanced so that portable generators can be expeditiously connected. These stations should have power to operate their convenience stores and have provisions to recharge cell phones. The cost of these changes should be from $4,7001 for the alterations to around $26,0102  for an installed generator and switchgear.

Think of the difference this would make now in New Jersey and New York and what it costs to do nothing in preparation for the next storm. This would be a long term benefit and only a small fraction of the costs of clean-up and it would eliminate one of the major sources of frustration after the storm. In addition the fuel stations are receiving revenue and providing needed stores of other products instead of closing and adding to their own insurance claims.

Cell phone towers and their support systems are also known to be vulnerable and in some cases simply cannot be repaired in a timely manner.  Because each emergency response seems to rely more and more on cell systems, let’s fix this weakness. Portable Cell Phone stations should be designed into large over the road or flyable containers so that they can be moved into a damage area and the system deployed and powered if necessary from a second container holding a generator and fuel supply for four days of continuous use. These systems could be configured with a satellite dish for long distance signaling and would employ small towers adequate for short distance cell service. They could be moved into or close to disaster areas before the event and then be deployed (made operational) after the storm fury subsides.  Cell phone communication is becoming a standard that works across networks and systems simply because they are everywhere and everyone has one.

We have seen the past rebuilding problems of landline communications after storms and cell phone systems work more reliably and seamlessly if towers and communications gear is available. The portability of the modules would allow them to be flow into high points (either buildings or terrain) to gain the largest advantage of coverage in the most critical areas.  These estimates of cost are conceptual however each tower, communications gear and support equipment should cost approximately $650,000.00 to prepare. Actual transport and set-up would add to the costs however the utility and flexibility gained from these modules would simplify and accelerate the rational distribution of emergency services and personnel to speed recovery and restoration efforts.